The CCI director-general last week filed a report that accuses Google of abusing its dominant position to rig search outcomes.

MUMBAI: Flipkart, Facebook, Nokia’s maps division, MakeMy-Trip.com and several other companies have corroborated complaints that US Internet giant Google abused its dominant market position, in their response to queries raised by the Competition Commission of India.

Based on the responses from 30 businesses spanning search, social networks, ecommerce, travel and content sites, the CCI director-general last week filed a report that accuses Google of abusing its dominant position to rig search outcomes, both the actual search result as well as sponsored links. This marks the first case globally where an antitrust body is formally raising such charges against Google.

The initial complaints were filed by Bharat Matrimony and a Jaipur-based not-for-profit,Consumer Unity and Trust Society. Microsoft has made an extensive submission on Google’s alleged abuse of power, according to the report, seen by ET. Others who responded to CCI include Map-MyIndia.com, Hungama Digital and GroupM.

Google needs to file its response to the findings by September 10, and a week later present itself before the seven-member commission headed by Chairman Ashok Chawla. The proceeding can go on for several hearings before the commission makes a decision, which can be challenged in the Supreme Court. If the commission finds Google guilty, it can ask the company to make changes in the way it does business.

CCI may also impose a fine up to 10% of Google’s income. The CCI could also pursue against top Google executives. Google posted a net income of more than $14 billion on revenue of $66 billion in 2014. 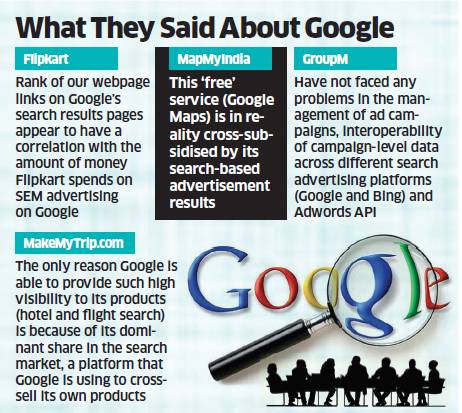 “We’re currently reviewing this report from the CCI’s ongoing investigation,” a Google spokesman said in an email to ET. “We continue to work closely with the CCI and remain confident that we comply fully with India’s competition laws. Regulators and courts around the world, including in the US, Germany, Taiwan, Egypt andBrazil, have looked into and found no concerns on many of the issues raised in this report.”.

The commission’s report finds Google liable on two counts. First, Google’s proprietary content supersedes relevance of the search by an individual. This means, for example, even though Moneycontrol.com may have a higher hit rate for a stock market search in India, GoogleFinance links are given priority. Similarly, Google Hotels gets preference over other travel portals that may have higher traffic and therefore mathematically more appropriate as first results of a search.

The second is that the sponsored links thrown up after a search are dependent purely on the amount of advertising paid to Google, and sometimes even supersede the link of the actual trademarks being searched. Flipkart, in its observation, said it has found search results to have a direct correlation with the amount of money the ecommerce portal spends on Google advertising. A Flipkart spokesman declined comment on the company’s response.

The report finds that the prominence of the search result is dependent on a quality score. The score itself says the report is calculated ambiguously. It highlights that Google modifies its search algorithms without informing users and changes results in dramatic changes. It cites the example of a UK website, Ciao!, which slipped to the second page of search results from one of the top results overnight. As a result of this the organisation lost substantial business. “As a result of Google policy, it is unavoidable for the trademark owners to participate and outbid third parties in the auction process for their ads to appear above others in response to search queries on their own trademark keywords,” said the report.

The report dismisses Google’s submission that its nature of search is similar to that of Facebook and Twitter, which the report says are social networks, not web searches. A Facebook response cited in the document elaborates how searching within the social networking site is different from web searches. Hence, the DG concludes that Google’s practices were counterproductive to innovation, as they increase costs for listed websites.

Google’s using foreign arbitration clauses in case of disputes is also considered abuse of dominance, according to the report.

Google has the option to seek more time to respond to the CCI report. It had been fined .`1 crore last year for delaying information the commission had sought. Before the commission Google will be represented by law firms AZB & Partners and Economic Law Practice, while the two informants are represented by Shardul Amarchand Mangaldas and APJ-SLG Law Offices.

Google has successfully emerged from a similar query by the Fair Trade Commission of the US after it made some voluntary commitments to changes. Google adopted a similar approach with the European Commission, but the EC after a series of submissions has raised a statement of objection to which Google responded last week. The commission will now deliberate on the matter before pronouncing a verdict in favour or against Google. If the Indian body beats the EU to it, experts said the outcome here could affect the one in Europe.

This news item can also be viewed at:
http://economictimes.indiatimes.com
http://thetechportal.in