GENEVA. While trade played a considerable role in uplifting millions of people out of poverty, the new development agenda has renewed the global trade community’s attention on the needs of those marginalised communities that are yet to reap its benefits.

“Many jobs generated by trade in the developing world are in the informal sector, where working conditions tend to be less decent”, said CUTS International’s Executive Director, Bipul Chatterjee, while introducing a discussion themed “No one left behind” on the first day of the WTO Public Forum in Geneva.

With SDG8 aiming at “full and productive employment and decent work for all”, discussions aimed to identify policy strategies and mechanisms that can enable economic growth while providing equitable and safe jobs with fair income, focusing on communities marginalised by trade liberalisation. According to the International Labour Organization (ILO), the four pillars of decent work are employment creation, social protection, rights at work and social dialogue. 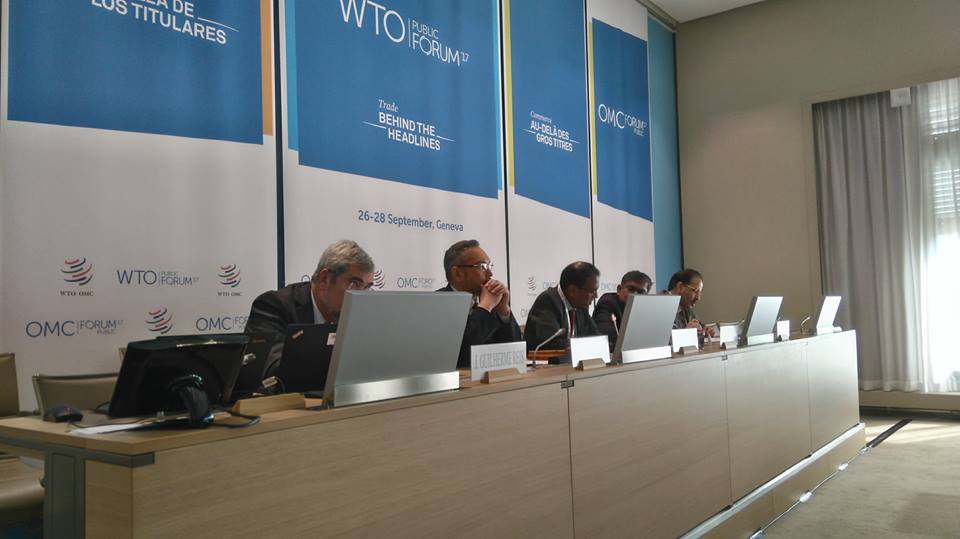 “The ILO was originally established in response to fears that cross-border economic competition would prevent the adoption of more progressive labour laws, which remains a contemporary issue”, recalled David Cheong, Chief Technical Adviser at ILO referring to the current political backlash against trade openness. According to him, the connexion between trade and employment remains very relevant, as evidenced by the identified role of Aid for Trade in an SDG8 target.

Trade has significantly contributed to the peace agenda since World War II, and provided opportunities for workers to adapt to new emerging services, benefit from E-Commerce and develop new skills. Nevertheless, “skill requirements of workers are fast changing in the new technological environment, and policies geared towards re-skilling them are needed to grant them better incomes”, advised Syed Nayyar, Senior Counsellor, Trade and Development Division, WTO.

Speaking from a developing country perspective, Mostafa Abid Khan, Minister at the Permanent Mission of Bangladesh in Geneva, recalled that at the root of many countries’ employment challenges is the concentration in low value added sectors like agriculture. “To meet SDG8, the first priority is to ensure economic growth, which requires developing productive capacities. This requires mobilising resources domestically, including by tackling illicit financial flaws and tax evasion”, he said.

Mr. Abid Khan also lamented that, despite the Istanbul Programme of Action’s set target to double the share of LDC exports, this has actually decreased and unemployment remains high. Yet, trade initiatives like Duty-Free, Quota Free (DFQF) market access have created huge employment opportunities in Bangladesh, especially for women. Similarly, discussions pointed to the need to continue tackling non-tariff barriers so as to maximise the positive impact of trade for those excluded. “NTBs are very important in trade today, and studying their impact is important as they seem to affect more adversely SMEs”, noted José Guilherme Reis, Practice Manager, Trade and Competition Unit, The World Bank Group.

Mr. Reis also referred to a recent study by the World Bank, IMF and WTO, which pointed to the need for a holistic policy approach to labour issues. The study also recommended safety nets on the short term and productivity-enhancing measures on the long term.