18-19 October 2011, Bangkok
The Chaophraya Dialogue is a joint India-Pakistan track-two initiative undertaken by the Australia India Institute (AII) at Melbourne and the Islamabad-based Jinnah Institute to encourage informed dialogue on Indo-Pak relations. The process has so far led to six rounds of dialogue and is now in its third year. 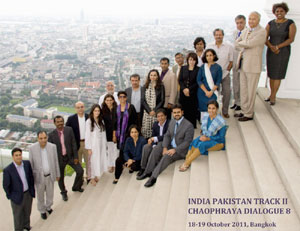 The dialogue is primarily meant to give an opportunity to informed members of the media and strategic community in India and Pakistan to interact with each other on a sustained basis. Past participants in the Chaophraya Dialogue have included senior former officials, media (including Ambassadors, Foreign Secretaries, Intelligence Chiefs and top-ranking members of the Armed Forces), academics, journalists, political leaders and civil society from India and Pakistan.
The Chaophraya Dialogue has encouraged participants to share the conclusions of each round with their respective governments. It has also provided a useful forum when the official dialogue process between India and Pakistan has been frozen. This was witnessed after the 26/11 attacks in Mumbai. During this period, when the official talks between the two countries were suspended, the Chaophraya dialogue managed to bring together senior interlocutors from the two countries in Bangkok more than once.

Leading journalists from India and Pakistan met at Bangkok for the 8th round of the Chaophraya Dialogue from 18-19 October 2011. They conducted a comprehensive two-day dialogue on a range of issues impacting the bilateral relationship: terrorism and extremism, Jammu and Kashmir, Afghanistan, and trade and economic integration. The Dialogue concluded with the following recommendation

This news item can also be viewed at:
http://www.openthemagazine.com/