Economic Times, August 04, 2014
Prime Minister NarendraModi’s upcoming visit to the US could be significant as India hopes to take trade talks forward when the World Trade Organization (WTO) meets in September after the summer break, signalling its commitment to the multilateral trading system.

India will try to engage with other countries during the August break to get stronger backing for its proposal of finding a permanent solution to the issue of public stockholding for food security by December 31.

“We are fully committed to the Bali accord and will resume talks in September. Prime Minister will also take up the matter with US President Barack Obama during his visit next month. It is very important to convince the US to get the public procurement matter on the negotiating table,” a government official said.

Trade talks collapsed in Geneva last week after India insisted that the entire Bali package, including the food security issue important to developing and poor countries, should be sealed at one go. 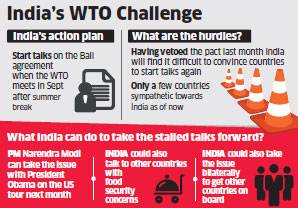 A protocol on trade facilitation — measures to reform customs procedures and cut red tape to speed up global trade — was to have been signed by July 31, as agreed in Bali. Apprehensive that the developed world would lose interest in the issue of food security once the trade facilitation agreement was signed, India didn’t sign the deal, saying the entire Bali package could be delivered by December 31.

WTO’s agreement on agriculture limits farm support at 10 per cent of the value of production based on 1986-88 international prices. India wants the subsidy to be calculated on a more recent base year or indexed to inflation. US Secretary of State John Kerry, who visited India last week, is understood to have told Modi that failure to sign the agreement “sent a confusing signal and undermined the very image the new government was trying to send about India.” Modi told Kerry he was more concerned about the small Indian farmer, even though he believed the trade facilitation agreement was good for India.
It may be a challenge to convince all 160 members to get back to the negotiation table in September. “PM’s visit will be crucial from many perspectives, including taking forward the Bali deal and also pushing WTO to the successful resolution of outstanding issues of the Doha round,” said Abhijit Das, a trade policy expert with the Centre for WTO Studies at the Indian Institute of Foreign Trade.

He said it will be important for India to get on board other countries that have similar problems related to food security. “A broad-based coalition would need to be formed to take the food security agenda forward,” he said. While it will be the responsibility of the entire WTO membership to take forward the Bali deal, India’s role will be crucial in trying to broaden the base of countries, added Das.