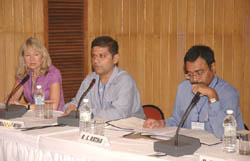 The objective of the meeting is to bring together diverse stakeholders ranging from government officials to representatives of export promotion councils, civil society organisations (CSOs), business houses, academia and media to discuss findings by CUTS International on the National Foreign Trade Policy (NFTP) of India and provide their views regarding the same. This feedback would be used to formulate recommendations which would then be submitted to the Directorate General of Foreign Trade (DGFT).

The NFTP of India, 2004-2009 came into existence as a part of the process of economic reforms that India has been following since the early 1990s. It replaced the Export-Import Policy of India.

The aim of this Policy is to promote exports of products from specific labour intensive sectors such as agriculture, handloom and handicrafts, marine, gems and jewellery, and leather and thus simultaneously contribute to employment generation. Given that these products have recently been facing new types of tariff and non-tariff barriers, several steps have been taken through this Policy to enhance their exports in major markets. However, many Indian producers (especially small producers) are unaware of these initiatives.

The overall goal of this project is to foster equity and accountability in economic governance in India, in the context of the impact of globalisation on the livelihoods of the poor and marginalised sections of society, through generation of economic literacy and a more coherent civil society voice. The focus of this phase is on the NFTP of India.

CUTS research team came out with a synthesis paper entitled, The National Foreign Trade Policy 2004-09: General and Specific Reflections after critically evaluating the previous NFTP (2004-2009), its impact on the grassroots, export oriented production and human development. The synthesis paper conducts an analysis of data/perceptions collected from field surveys in the mentioned eight project states. This examination is then used to derive messages and recommendations for future implementation which would be discussed and finalised during the consultation for submission to the DGFT.