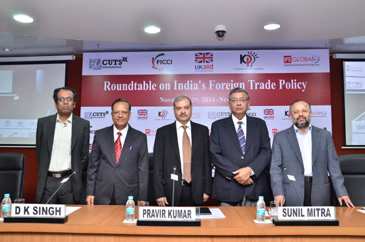 The new Foreign Trade Policy (FTP), that is on the anvil, will unveil trade facilitation measures, simplify procedures, reduce the interface between bureaucrats and industry for ease of doing business and make the system transparent, according to Mr Pravir Kumar, Director General of Foreign Trade (DGFT).

“The policy would encourage exploration of new markets and product diversification for export. The Indian government recognises the importance of trade for growth of economy and the new FTP would be dovetailed with the long-term vision of the government,” Mr Kumar told a roundtable on ‘India’s Foreign Trade Policy’ organised by Ficci, CUTS International and IPE Global Ltd.
The round table was held with the objective of providing essential recommendations to Mr Kumar who may consider including them in the new FTP, which is to be announced next year. The underlying philosophy of India’s FTP is to provide an effective and transparent framework that gives impetus to export and import, said Mr Kumar.

He also assured trade and industry that the new FTP was being formulated only after extensive stakeholder consultations and to the extent possible the draft policy would include recommendations of the industry.

On export of taxes with a product, Mr Kumar said the policy is looking at compensating exporters and creating a level playing field so that they do not have to bear the extra burden of taxes. He urged the industry to focus on ‘how’ instead of ‘what’ and ‘why’ when it came to increasing trade in the country. He said the targets are well-known, now it was time to create an effective way forward.

Mr Sunil Mitra, Director-KPP, DFID-IPE Global, said the new FTP should be better integrated and the new developmental dimensions should be taken into account. In his theme presentation, Mr Bipul Chatterjee, deputy executive director, CUTS International, said for trade policy to be an effective institution there must be convergence between trade policy objectives and broader economic welfare objectives.

FTP should mainstream trade into national development for large-scale job creation, promote two-way trade and investment, he added. Mr Manab Majumdar, assistant secretary general, Ficci, said the interaction with Mr Kumar and Mr DK Singh, additional director general of foreign trade, department of commerce, who was also present at the round table, were fruitful for industry.
This news item can also be viewed at:
http://www.thestatesman.net/
http://www.merinews.com/
https://in.finance.yahoo.com/
http://www.24dunia.com/
http://news.chennaionline.com/
http://www.smetimes.in/