Indian interests are not affected by its exclusion from TPP says, a group of economists gathered at a seminar in RIS led by Mr Rajeev Kher, former Commerce Secretary.

Mr Kher argued that the challenge is not whether or not to join TPP “but to look inwards”. TPP is not a standalone entity but is happening in a wider global architecture. Unless domestic issues are tackled – production and services — we will not be able to address the challenge of TPP, he added.

Prof. Sachin Chaturvedi, Director General, Research and Information System for Developing Countries (RIS) emphasized that in the light of the recent developments, it would be in India’s broader economic and commercial interest that it helps speeding up of RCEP. Rather than having fear psychosis towards TPP, India must focus on domestic economic reforms. 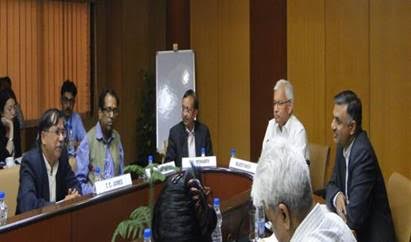 According to Prof. Mohanty, India joining the TPP is indeed a critical question; it has to undertake country-wide reforms. India has large additional trade potential in the US market. The proposed standards at TPP are a matter of concern in areas like, labour standard, environment, government procurement, IPR, etc. India should give due credence to the RCEP and various other bilateral trade negotiations. India must have a nuanced understanding of plurilateral versus multilateral versus bilateral deals.

There are provisions which adversely affect the availability of medicines at affordable rates to patients in developing countries like India argued TC James. The provision to grant patents to “new uses of a known product” is fraught with grave implications as it may lead to ever-greening. Similarly, the special treatment extended to pharma patents, placing them in a preferred category compared to other technologies, by patent term adjustment for regulatory delays, also will lead to a longer term for patents. The treaty brings in new handicaps for India’s pharma industry which is mostly generics from getting marketing approvals.

Bipul Chatterjee of CUTS said “TPP per se will not have much impact on the country”, he stated. The tariff impact is also minimal. But domestic issues need to be looked at like e-commerce and the digital economy. There is a need to address the agrarian crisis and reform the input markets like land, labour and logistics. Will TPP be ratified in its present form? He was of the opinion that it will happen in a more diluted form, so there is no need to be worried about TPP in India.
For more information, please contact