Business Standard, March 27, 2012
While Pakistan has done away with a positive list for trade with India and has introduced a shorter negative list, it has tightened its stance by putting a few primary items of India’s interest in the new list. These items include textiles, automobile, chemicals and pharmaceuticals. 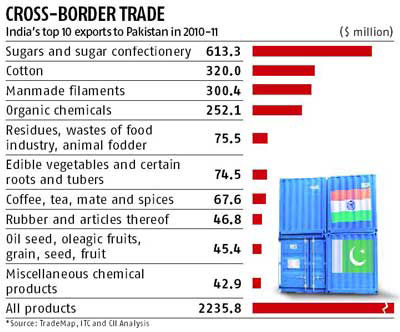 The negative list, operational from March 21, contains the 1,209 items India cannot export to Pakistan. India would now be allowed to export around 7,500 items. In the positive list, under which India could export only 1,946 items, the key items of export were vegetables, meat products, animals, fruits, tea, spices, palm oil, crude oil, sugar, cotton and organic chemicals.

For several years, an important aspect of Indian exports to Pakistan has been the growing importance of chemicals and textile products in the export basket, which are now being barred.

However, experts believe this would not make a substantial difference, as the negative list is likely to be phased out by December and traders in both the countries are now looking for a more long-term trading relationship, not a need-based one.

Biswajit Dhar, director-general, Research and Information System for Developing Countries, said, “Textiles & clothing is an area where both countries are competitors. This happens with our other trading partners as well; it is not only with Pakistan. It would be unfortunate if we start reacting to what is there and not there in the negative list, because then, whatever little progress we have made would be washed away. We must remember this is a very sensitive political issue and there is a lot of apprehension in Pakistan that the domestic industry would be adversely impacted if trading with India is normalised.”

Also, even though the negative list has opened a new chapter in India-Pakistan trading relations, trade at Wagah would remain confined to the current 137 items. This would be reviewed after the completion of trade infrastructure at Wagah and Attari.

S M Muneer, president, India-Pakistan Chambers of Commerce and Industry, said, “Our auto, textiles and pharma industries have some reservations over phasing out the negative list and granting India the most-favoured nation (MFN) status. Having said that, I also think there should be no negative list, as we do not have such a list with Europe or Japan, which are our large trading partners. And, I am sure gradually, once everything starts running smoothly, fears of the domestic industry would also go away.”

The total trade between the two countries has been growing at compounded annual growth rate (CAGR) of about 29 per cent, primarily due to the volume of India’s exports. For instance, during 2001-02 to 2010-11, India’s exports to Pakistan grew at a CAGR of 32.1 per cent, while India’s imports from Pakistan registered a CAGR growth of only 17.8 per cent. According to a study by the Confederation of Indian Industry (CII), India’s exports to Pakistan have been growing at twice the growth rate of its imports from Pakistan.

A similar study by the Federation of Indian Chambers of Commerce and Industry suggests the decline in global trade after the global financial crisis impacted trade between the two countries. However, when bilateral trade picked up in 2009-10, the trade balance continued to favour India heavily.

“We do not mind a trade balance with India, as it is a big country. Nothing can happen at once. A level-playing field will be created when the negative list goes out, and that is what the traders and exporters on both sides are waiting for. The 21st century is for trade competitiveness and not war,” said Haji Ghulam Ali, president, Federation of Pakistan Chambers of Commerce and Industry.

The CII study also stated trading under the positive list approach had led to large informal trade flows, mostly in items excluded from the positive list. A large proportion of the trade is routed through Dubai, from where goods enter the Pakistani market after passing through Iran and Afghanistan, or directly through Karachi by sea.

Bipul Chatterjee, deputy executive director of CUTS International, said trade could be enhanced to $10 billion a year, including formalisation of informal trade through third countries, if some significant non-tariff measures were addressed.

Pakistan has often complained about the various trade facilitation problems it faces in trade with India, owing to which it was not able to penetrate the Indian market. According to Pakistani officials, this is also a reason why it could not grant the MFN status to India all these years.

Nisha Taneja, professor, Indian Council for Research on International Economic Relations, said, “A number of NTBs (non-tariff barriers) are perceived due to lack of information on the regulatory regimes prevalent in India. These need to be addressed. Though there are visa restrictions on both sides, India has a far more restrictive visa regime towards Pakistan than Pakistan has for India. India needs to play a more active role in liberalising the visa regime so that trade is not hurt.”

This news item can also be viewed at:
http://business-standard.com/