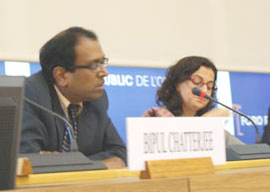 Bipul Chatterjee of CUTS International said that existing multilateral rules are weak and do not reflect the reality. Food export restrictions have no impact, either on a short-term basis nor on a long-term basis, where a reduction in the production of certain food grains will occur and both consumers and exporters will suffer. Mr Chatterjee stated alternatives to export restrictions must be found through tax rate quotas or viable tariffs.

Dmitri Ryklo, General Director of the Institute for Agricultural Market Studies, gave a domestic view of Russian grain export restrictions — export restriction measures taken may be for other economic reasons beyond food security and domestic measures were necessary to deal with volatility of food prices in order to avoid the ban on exports. Mr Ryklo demonstrated that trade restrictions on exports had a positive effect on Russia’s trade. He suggested that countries improve domestic grain production, grain stocks statistics, domestic crop insurance systems and the creation of a foreign grain export obligations fund enabling countries to fulfil their international obligations in case of default.

Debapriya Bhattacharya, of the Centre for Policy Dialogue (Bangladesh), said that food security issues are caused by trade restrictions, but also food shortages and least developed countries are sensitive to food export bans since prices increase as a result. He said that monetary solutions to food security issues are futile and that FTAs should not contain provisions on export restrictions.

Arancha Gonzalez, speaking in her personal capacity, pointed out that export restrictions are not a new phenomenon, nor a minor issue (“domino effect” as a result of measures taken) and that there is no easy solution. The food security problem must be tackled domestically, she said, and existing WTO mechanisms should be used effectively by members instead of engaging in new multilateral negotiations.

This news item can also be viewed at: http://www.wto.org/