Business Standard, March 23, 2012
Trade liberalisation across five south Asian countries would result in a consumer welfare gain of at least $597 million to India and $2 billion to the region, says a study by think-tank CUTS International. Consumer gain is defined as a difference between the total import expenditure and likely import expenditure if that country were to import products at a lower price from the region. 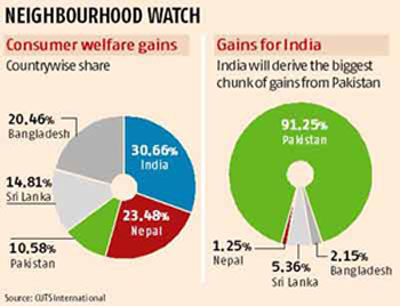 The five nations in the study are India, Bangladesh, Nepal, Pakistan and Sri Lanka. The study, titled ‘Cost of Economic Non-Cooperation To Consumers in South Asia’, covered 355 product categories under the South Asian Free Trade Agreement (Safta) and are not subject to tariff reduction. The study does not cover the Maldives, Bhutan and Afghanistan, also a part of Saarc.

The gains would result from savings on the expenditure on imported products from other countries in a select category of products, if such products are sourced from within the region.

The study also said the Safta had failed to enhance the growth of intra-regional trade due to limited tariff preferences extended to a country’s trading interest, limited depth in tariff cuts and prevalence of non-tariff barriers.

Though Pakistan receives only 10.5 per cent of the total gains, the lowest, it saves 59.04 per cent on its current import expenditure on select products.

The study said intra regional trade in South Asia represented only five per cent of the overall trade flows, which is a drag on the economic growth.

The study comes amid talks of Pakistan granting India the status of most-favoured nation. Yesterday, Pakistan had issued a negative list of 1,209 items. The new list means 6,000 more items can be exported by India to Pakistan.

This news item can also be viewed at:
http://www.business-standard.com/