Small farmers in both India and Bangladesh suffer from low agricultural productivity. Increasing crop productivity is, therefore, one of the major challenges faced by these farmers. Given the level of poverty and the imperative of agricultural growth in poverty reduction, this is particularly important in Eastern India and in Bangladesh. Statistical evidences show that not only that the productivity of small-holder farmers is low in Eastern India and Bangladesh but also, and as compared to other products and other regions of India, it is less in case of rice production, the most important staple crop in these regions.

Even though the adoption of high-yielding (inbred or hybrid) varieties of seeds is quite high among small farmers in both eastern part of India and Bangladesh, why is it that the productivity of small farmers, particularly rice farmers is not that high? Is it a case of high-yielding varieties of seeds not yielding higher productivity as a result of unfavourable environmental conditions and other factors/agricultural practices?

While in case of Eastern India the problem of using high-yielding hybrid varieties of rice seeds is not so much about their availability, it is so in Bangladesh. Bangladesh imports most of its requirement of hybrid rice seeds from China. It is surprising that much of this Bangladeshi import of hybrid rice seeds is not sourced from India, particularly Eastern India. Similarly, formal trade of seeds of high yielding rice varieties from India to Bangladesh is almost non-existent, despite some ground-level evidence of informal cross-border movement of seeds. Similarity of agro-climatic conditions in eastern India and Bangladesh indicates that high yielding rice varieties grown in eastern India are also likely to be suitable to conditions in Bangladesh (particularly, in the south western, western and north-western regions). Similarly, it is also known that Bangladesh has released about 70 high-yielding varieties of rice. Yet, a lack of formal seed trade restricts the opportunities for gains to farmers on both the sides.

The project makes an attempt to understand the factors which lead to (1) low productivity of rice in the identified regions; (2) low rice seed trade between India and Bangladesh; and (3) how can the situation improve? It also seeks to provide answer to some important questions: what would be the potential gains to Bangladesh from substantially larger capacity of India to produce rice seeds, if they are imported? What would be the likely gains for Indian farmers from the use of some of the varieties developed by Bangladesh, if formal trade in seeds develops?

The project through the production and dissemination of advocacy documents, policy briefs, policy advocacy messages will conclude with a forward-looking agenda on regulatory matters for enhancing rice seeds trade between India and Bangladesh including an agenda for cooperation on larger issues of agricultural development in Eastern India and Bangladesh. 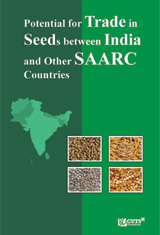 Potential for Trade in Seeds between India and Other SAARC Countries 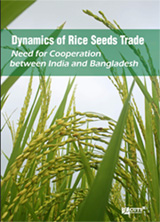 Dynamics of Rice Seeds Trade Need for Cooperation between India and Bangladesh
Poster
Cooperation in Rice Seeds: A Potential Way to Sustainable Rice Production in Bangladesh and India
Useful Resources 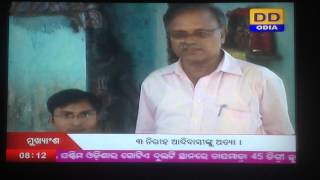 The activities under the project during its implementation cycle will generate some tangible outputs. These activities, outputs and intermediary outcomes to be based on and linked to achievement of the three project objectives and overarching goal of the project as detailed below

The project will be implemented in partnership with four local organizations in four selected states, namely Bihar, Jharkhand, Orissa and West Bengal in eastern India and one organisation in Bangladesh. For engaging partners, CUTS will enter into separate, time-bound, output- and activity-based contract with the consultants. CUTS will remit money to the consultants on a reimbursable basis. Consultants will be required to send quarterly invoice and expenditure statement (after implementing activities of a previous quarter) and they will undergo a process of approval at the CUTS Finance & Administration Division before an amount of money is remitted.

The implementation of the project will be monitored and supervised by the especially constituted Project Advisory Committee (PAC) consisting of project partners, experts working in the field of rice seeds, and other important stakeholders. The project monitoring will run through the project cycle of 21 months – January 2013 to September 2014.

The project activities and progress will be consistently monitored and evaluated by a Project Advisory Committee (PAC). The PAC is to monitor and supervise progress of project activities during the life cycle of the project. The PAC consists of 12 members. Besides CUTS, five project partners, project experts, a media partner and a deputed member from Gates Foundation as ex-officio, four other members will be invited. They will be from among experts in India and Bangladesh with significant exposure in the field of rice seeds.