As part of the Sixth Global Review of Aid for Trade, CUTS International organised a side event titled “Enhancing Connectivity in the Bay of Bengal Region and Beyond”. This year’s Review focuses on the promotion of Trade, Inclusiveness and Connectivity for Sustainable Development. The main question addressed in this session is how transport and transit initiatives can enhance intra-regional trade. 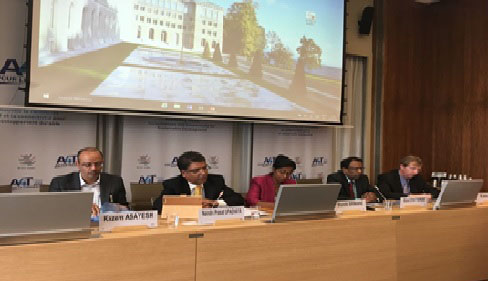 “Connectivity can help BIMSTEC harvest its true economic potential,” said Naindra Prasad Upadhaya, the Commerce Secretary of Nepal. A number of existing transport and transit initiatives in the Bay of Bengal Region have implications for trade inclusiveness and sustainable development through the reduction in time and cost of doing trade. He argued that connectivity is one of the major vehicles to achieve Sustainable Development Goals and this can be done through enhancing the linkages between physical and digital connectivity as the latter allows, for instance, small and medium enterprises to meet trade-related standards.

Chairing the session, Shamika Sirimanne, Director of the Division on Technology and Logistics of the United Nations Conference on Trade and Development, underlined why connectivity should be the key driver of intra-regional trade and investment and that various forms of connectivity should work in tandem in order get maximum benefits out of them.

Bipul Chatterjee, the Executive director of CUTS International, reviewed the existing initiatives such as BBIN (Bangladesh, Bhutan, India, Nepal) Motor Vehicles Agreement and presented the CUTS connectivity project on enabling an inclusive policy and political economy discourse for trade, transport and transit facilitation in and among Bangladesh, Bhutan, India, Nepal and Myanmar. He underlined some strategic issues such as misalignment among multiple initiatives, institutional and regulatory connectivity gaps hindering an effective regional connectivity.

Kazem Asayesh, Senior Advisor on TIR and Trade facilitation in the International Road Transport Union, focused on the importance of the TIR Convention, which is a globally agreed transit system, in enhancing physical connectivity among countries of the Bay of Bengal Region. He addressed the issue of the efficient implementation of the transport agreements, since in so many cases those agreements remain on paper. He suggested that a major reason behind their implementation is the lack of guarantee mechanisms, which give guarantee to the customs for duties and taxes. The TIR system provides such guarantee mechanisms.

Furthermore, and admitting that administrative procedures are an important barrier toward an efficient trade performance, Yann Duval, Chief of the Trade Facilitation Unit in the Trade, Investment and Innovation Division of the United Nations Economic and Social Commission for Asia and the Pacific, underlined the importance of the UNESCAP cross-border electronic trade facilitation initiative. It consists of using electronic documents instead of papers in cross-border administrative procedures. While this paperless initiative aims to facilitate trade and decrease administrative impediments by unifying different countries’ data and improving trade compliance, challenges remain due to the lack of legal recognition of electronic documents.

In her presentation, Tran T T Hang of the Enhanced Integrated Framework Secretariat explained the work the EIF is dong in the BIMSTEC region and the possible areas of a regional-level collaboration through analytical works, project formulation, policy and support mechanisms through exiting projects. She also suggested doing regional diagnostic studies for more effective utilization of the EIF support..

Kamalinne Pinitpuvadol, the Executive Director of the International Institute for Trade and Development in Thailand, focused on the role of Thailand and Myanmar in promoting connectivity in the region. He raised issues such as the importance of effective enforcement, people-to-people connectivity.

Marcus Bartley Johns of the World Bank Group focused on the lessons learnt from regional connectivity initiatives in other regions such as East Asia. He suggested that the national and the regional efforts must be aligned to ensure connectivity through cross-border collaboration and reminded that connectivity must be addressed in an inclusive manner and through the perspectives of poverty reduction.

Pranav Kumar, Head of the International Trade Policy Division of the Confederation of Indian Industry, gives the voice of the private sector by raising questions regarding the coordination mechanisms linking connectivity initiatives and the need to generate financial resources as a main challenge toward developing infrastructure.

Finally, Mr Chatterjee concluded the session by raising the question about the impact of connectivity initiatives on people and argued that unless there is local buy-in for such initiatives their true potential may not be realised.