External trade of South Asian countries is increasing at a rapid pace, but intra-regional trade in South Asia is very minimal compared to other economic blocs of the world. Between 1995 and 2005, intra-regional trade in South Asia hovered around 5% of total trade of these countries. On the other hand, such (intra-regional) trade ranged between 20-60% in the case of many other regional economic blocs. Although the South Asian Association for Regional Cooperation (SAARC) came into effect in 1985, trade has never been a major driver of this initiative. Although a Free Trade Agreement (SAFTA) came into existence in 2004, it has so far underperformed in making significant advancements in intra regional trade. SAARC member states are also yet to initiate an institutional framework to take further steps toward full economic integration – for instance, there is no mechanism in place to discuss the next step (after an FTA) to form a customs union, then a common market, and finally to form a monetary union with a common central bank and a regional currency.

The net result of economic non-cooperation among the South Asian countries is high costs to consumers. For instance, it is estimated that trade between India and Pakistan could have been 70% more than what it is today if there were effective cooperation and this would bring down prices of many key commodities significantly by avoiding additional costs of imports from outside the region. Even after taking into account transport-related infrastructure bottlenecks, South Asian countries are capable of enhancing their intra-regional trade through better exploitation of complementarities in the South Asian value-chain.

The project report will help to generate awareness amongst South Asian policy makes regarding loss of consumer welfare on account of regional economic non-cooperation and will subsequently lead to policy actions for enhancement of trade and investment relations in the region.

The broad objective of the project is to analyse reasons for economic non-cooperation between South Asian countries, assess the costs thereof in terms of loss of consumer welfare and derive recommendations for minimising such welfare loss. Policy suggestions for giving momentum to the positive developments towards regional economic cooperation will be derived by systematically consolidating thoroughly researched information into a compelling snapshot for the public and policy makers. For this, the project will carry out: 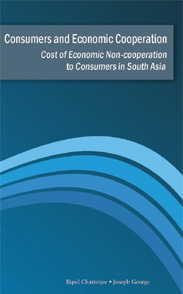 Cost of Economic Non-Cooperation to Consumers in South Asia