Looking at the present capacity of Indian exporters of many of these product categories, it seems difficult for them to meet new and higher international standards

The emergence of mega free trade agreements in the developed world, led by the United States, is threatening the multilateral trade framework under the World Trade Organisation. The United States and the European Union are negotiating a Trans-Atlantic Trade and Investment Partnership (TTIP). It is expected to cover two-third of world gross domestic product and one-third of world imports.

Similarly, the Trans-Pacific Partnership (TPP) among 12 countries including the United States, Canada, Mexico, Australia, Malaysia, Singapore, Vietnam, and Japan is also under negotiation and is expected to be completed by the end of this year. These countries account for around 38 percent of global GDP and 25 percent of global trade.

On the other hand, there is an on-going dialogue on Regional Comprehensive Economic Partnership agreement (RCEP), which covers the ASEAN (Association of South East Asian Nations) group of countries andsix more, viz. Australia, India, China Japan, Korea and New Zealand. The RCEP group of countries accounts for more than three billion people (over 45 per cent of the world population), with a combined GDP of about US$ 17 trillion.

These mega FTAs are expected to push global trade further into preferential trade. That would be a major setback to the on-going global trade talks under the WTO.

It appears that the TPP and TTIP areaimed to maintain the hegemony of United States and the EU in global trade. Theywant to set up new standards for international trade, which may be higher than the existing multilateral rules. A major reason could be to arrest the fall in their share in world trade since the beginning of this century. On the other hand, the share of RCEP group of countries is increasing steadily and there is a perception that RCEP is about countering the possible negative impacts of the other two mega FTAs. 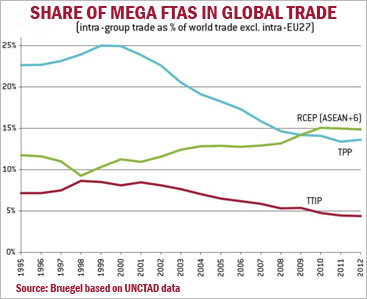 These two mega FTAs(TPP and TTIP) are likely to have far reaching implications on emerging countries like India. Though the magnitude oftheir impact is yet to befully measured, that can be done by: a) looking at how they would impact India’s exports and b)analysing how they would potentially undermine the WTO’s pre-eminence as a rule-maker of global trade.

Firstly, the elimination of trade barriersamong the members of these FTAs could create trade diversion, particularly in tariff-sheltered sectors of India. This includes textiles and footwear, agriculture and garments, all of which are relatively more labour intensive. Furthermore, there will be new and higher standards including a stricter intellectual property rights regime, which can act as technical barriers to India’s exports. Indian exporters will have to adhere to those standards and that would impact their competitiveness.

Looking at the present capacity of Indian exporters of many of these product categories, it seems difficult for them to meet new and higher international standards. Moreover, they may create a sui generis dualregulatoryregime in key areas of product and process standards and intellectual property protection. Large export-oriented firms will have to adopt higher standards, while a large part of small producers will not be in a position to adhere to them due to lack of human and monetary resources.

Secondly, these mega FTAs will undermine the WTO-led, gradual trade liberalisation agenda in order to achieve their ambitious liberalisation and regulatory harmonisation before the completion of the Doha Round of multilateral trade negotiations. This is expected to drag the conclusion of the Doha Round. More importantly, they may become rule-setter and contaminate the process as well as content of multilateral trade negotiations.

Thus, this kind of new regionalism initiated by mega FTAswill result in sub-optimal outcomes for emerging economies like India. India’s engagement in RCEP negotiations should take this into account as many RCEP countries are also part of Trans-Pacific Partnership. If they want RCEP to agree to higher standards set by TPP then the competitiveness of many Indian exports will get significantly affected and that will constrain India’s ability to enhance its trade in those markets.