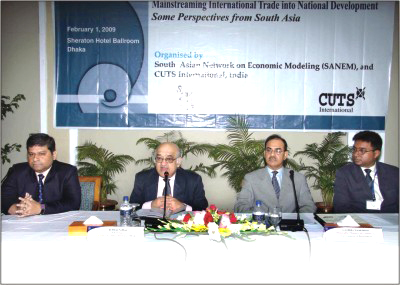 International trade analysts yesterday stressed regionalization of transit in South Asia to benefit the countries such as Bangladesh, Bhutan, India and Nepal.

Transport is a basic instrument in trade and South Asia has the potential to benefit from it, but most countries in the region lack a “true political will”, they said.

However, they believe India, as the largest country in South Asia, will play an “instrumental role” in creating a positive economic relationship with its neighbours.

“Bangladesh should take the transit issue dispassionately,” Nazneen Ahmed, a research fellow of Bangladesh Institute of Development Studies, said in her presentation at an international seminar on “Political economy of trade liberalisation in South Asia” at Dhaka Sheraton Hotel.

“Bilateral and multilateral agreements must be signed immediately among the countries involved to reap benefit from transit,” she said.

“Many things depend on the role of a big country,” said economist Dr Atiur Rahman, who also spoke at the seminar.

South Asian Network on Economic Modelling (SANEM) and CUTS International, India have co-organised the two-day seminar that focuses on how to channel international trade into national development in South Asian countries.

The world has been witnessing a growing regionalisation trend for the past two decades to maximise the benefits, but the thing is different for South Asians.

There have been many talks among the South Asian countries for years on the utilisation of transit, broadly referring to water, rail and road transports. But there is no tangible progress so far on the issue.

Bangladesh signed transit agreements with Bhutan in 1980 and with Nepal in 1976, but the deals remain unutilised because of Bangladesh’s ‘no’ to transit to India. India has been asking Bangladesh to allow transit for years.

“For Bangladesh it is sensitive. It fears losing sovereignty to a 23-times-bigger India, which is also surrounding Bangladesh on three sides,” Nazneen Ahmed said.

On the other hand, she said: “This fear is aggravated by the history of India’s overbearing attitude in many unresolved bilateral issues, including the water sharing of the Ganges river.”

The researcher blamed both India and Pakistan for their reluctance to take care of the matters of the neighbours seriously.

She said neighbours always expect India to “alley their insecurity” by making concessions to their needs.

Dr Atiur Rahman said India should know that its neighbours lack even in negotiating capacity.

“The bargaining capacities of Bangladesh and Nepal are not at the same level with India,” Rahman said.

Abid Suleri, executive director of Islamabad-based think-tank SDPI, emphasised a ‘real political will’ to reap benefit from the potentials of South Asian nations.

Subhashini Abeysinghe, an economist at the Ceylon Chamber of Commerce in Sri Lanka, said her country is not benefiting from the bilateral free trade agreement with India. “Local companies fear losing business to large Indian companies.”

Most of the South Asian countries started comprehensive trade reforms in the early 1990s. The reforms included a substantial reduction of tariffs.

But the economy of the region is still saddled with one of the least liberal trade policy regimes in the world, reflected in their ranks near the bottom on the Trade and Tariff Restrictiveness Index.

This news item can also be viewed at:
http://www.thedailystar.net/