Being the second fastest growing economic zone in the world, South Asia needs to have a cautious approach towards sustainable development balancing between the huge population density and its degrading natural resources. Besides the conscious and constant efforts taken by national governments and international agencies, acute poverty prevails in this region owing to poor policy and governance reforms, lack of infrastructure & institutional capacities, vulnerability to climate change, unscientific use of natural resources and poor regional cooperation. Poverty eradication is possible only through interlinking the key players of sustainable development viz., food water and energy. The linkages between food, water and energy are intricate and alterations in any one of the resources can have severe ramifications on other two resources. Considering the trans-boundary nature and the huge hydro-power potential of the major rivers (The Indus, The Ganges and The Brahmaputra), there is a need to address these issues of food, water and energy security through sharing and management of natural resources which again underlines the necessity of regional cooperation.
Sustainable Development Investment Portfolio (SDIP) is a portfolio investment approach by Australian Government’s Department of Foreign Affairs and Trade (DFAT) to address the issues of water, food and energy security in South Asia through better regional cooperation, policy reforms, technology transfer and capacity building targeting the poorest and most vulnerable, particularly women and girls. This investment strategy has a 12 year horizon which will be realized in three phases. CUTS International is one among the portfolio partners for carrying forward the activities related to SDIP. The targeted areas and the investment portfolio’s objectives are broadly stated as follows:

The overall Goal for CUTS in terms of its role in SDIP is ‘‘enhancing the value of DFAT’s Sustainable Development Investment Portfolio by linking its interventions with key actors (other partner organisations) and stakeholders through local and regional networks through policy research and advocacy.”

Following are the set of outcomes that CUTS will aim to achieve through its proposed set of activities:

The methodology has been divided into three phases of four years each. CUTS activities are designed keeping in mind its influence on SDIP domains and pre-conditions of change. CUTS will be refining its activities as and when required keeping in mind the evolving nature of this partnership approach. On a broader note, CUTS activities in phase 1 will majorly focus on expanding its networks throughout the region by linking itself with relevant strategic partners, conducting policy research on SDIP issues and annually assisting IOD PARC in undertaking the logistics of the annual SDIP Partnership Dialogues meetings. During phase 2, apart from the above mentioned activities, CUTS will indulge more into policy advocacy as it will be in a position to disseminate more information to the targeted stakeholders from its activities during phase 1 along with the activities performed by its strategic partners. The last phase (phase 3) will majorly focus on high level policy dialogues at different levels (local, sub-national, national and regional) to influence change and enhance regional cooperation in South Asia.

March 10, 2016 at Centre for Research in Rural and Industrial Development (CRRID), Chandigarh
Video Insights from the Grassroots 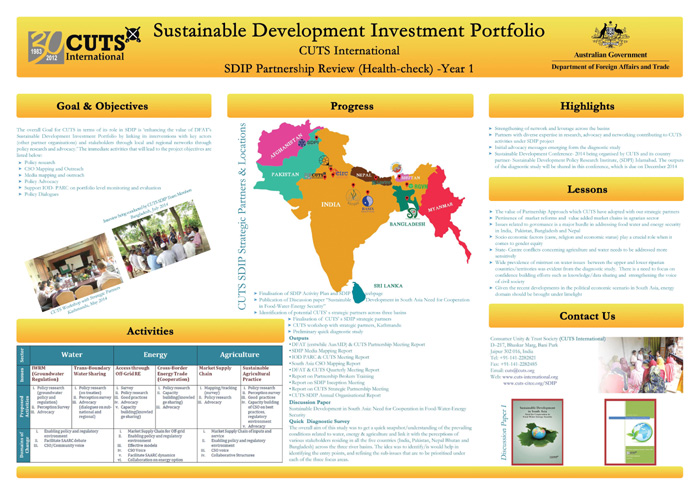 This article can also be accessed at
Anandabazar Patrika​, June 12, 2016